Welcome to AAJA-Asia’s New.Now.Next Media Conference (N3Con) newsletter second edition! With the latest registrations, we now have over 350 participants gathered online for reimagining news all week until August 7.

Following Reuters’ Gina Chua keynote session on Monday night, diversity has been on N3Con’s agenda in its second day, with the launch of AAJA-Asia’s Advancing News Diversity in Asia (ANDA) Project and a panel session on “Why Diversity Matters in News”. Read more about this and yesterday’s top sessions below and in the N3 Magazine. We wish you a great conference day ahead! 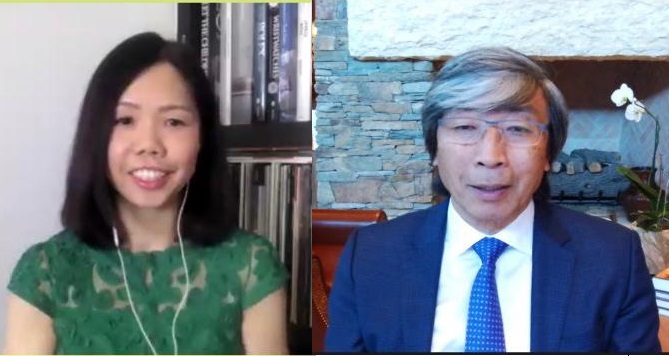 Dr. Patrick Soon-Shiong, a doctor, scientist, businessman and philanthropist, talked yesterday about the reasons behind his purchasing the Los Angeles Times.

As a Chinese-American who grew up in South Africa, he bought the paper not only to represent Asian-American community, but to represent the community at large.

The session started off with him hoping that his daughter could join him in this family business and ended with him discussing the Lakers, as a part owner himself.

When asked about his thoughts as a physician regarding the pandemic, he responded by saying, “nobody is safe until all of us are safe.”

He gave three tips on how to take care of oneself during this pandemic: first is to continue to wear a mask, second is to get vaccinated, and third is to be respectful of others, to wear a mask not only to protect oneself but to protect others.

Via a reverse approach, Bloomberg has used Odd Lots as news info materials for their daily news blog and newsletter. While their written content remains behind a generous paywall since two years ago, podcast content remains complimentary – as the gateway for new readership and for potential subscribers. Their audience is relatively younger, and more than 40% are financial professionals, Tracy shared.

Emily Feng, Beijing Correspondent of NPR, added that podcasts allow multi-tasking for listeners. “From the listener’s perspective, podcasts take off because of online streaming, which means ease of access for audiences.” From both a producer and a host perspective, ease of access to simplified audio recording technology such as an iPhone can still deliver a great result.

In terms of podcast production during a pandemic, Niala Boodhoo, host of Axios Today, a 10-minute morning news podcast from Axios, shared that her home studio was repurposed from a private phone booth. Remote podcast production was then possible, with remote coordination with other teams between Washington DC and New York City via online video conferencing tools such as Zoom.

Facebook has also invested in audio creation tools like Soundbites, which empower its users or journalists to tell their stories to engage friends or audiences, shared Kok Siew Yeo, Partner Solutions Manager, News Partnerships (Greater China), Facebook.  “Social audio experiences are not new to Facebook, as audio messaging is already available on our social apps like WhatsApp, Facebook Messenger.”

Moderator Rahul Bali, news anchor for Oconee Radio Group in Georgia, U.S., said that 90% of his interviews are now conducted through Facetime audio; he views bad audio quality as unacceptable. “The important key is audio quality; if it is bad, just re-do the recording,” Rahul advised.

By Jiaquan LuNikkei Asia Deputy Politics/Economics Editor Andrew Sharp leads an online run-through of newsroom operations from Nikkei headquarters in Ōtemachi, Chiyoda, Tokyo in this session. He touched on crossovers with The Financial Times, bought over by Nikkei in a US$1.3 billion deal in 2015, as well as DealStreetAsia, of which Nikkei acquired a major stake in since 2019. While there is no editorial crossover between the two publications, they do share resources across the world and there are some synergies in certain aspects.

“Nikkei Asia worked on various stories including international geographical affairs. And we do send younger reporters to Financial Times offices in NYC and London, for a 6-8 week stint, under Financial Times editors,” said Andrew. He also shared that Tech Scroll Asia, a weekly newsletter covering technology trends launched in 2017, featured all the best tech buzz from both Nikkei Asia and Financial Times. Nikkei Asia also “tends to pick one or two stories from DealStreetAsia” to feature on their online publication, with the preference of publishing their own news stories remains.

Referring to a recent editorial incident with the Singapore government, Andrew provided a general overview. “Often a corporation or a government may be asked to pull down a story – that is the last thing any newsroom wants to do because you want to stand by your reporting; and we do,” Andrew emphasized, as he reckoned the publication will have to get on with it. 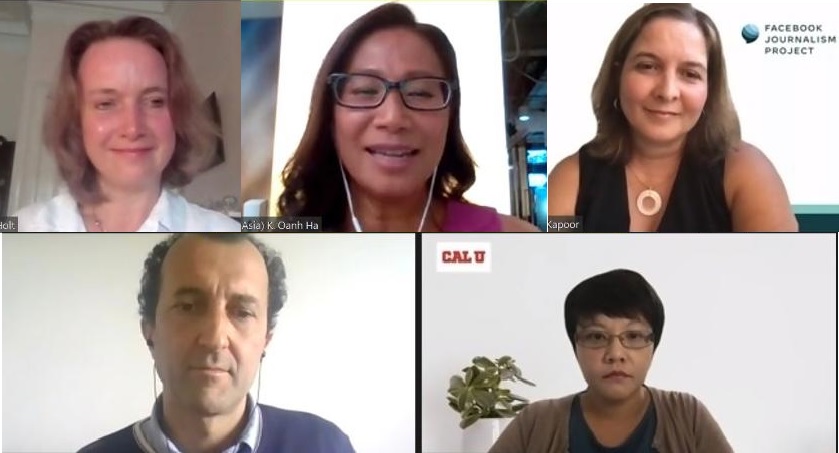 The ANDA project aims to raise awareness and support efforts to improve diversity and representation in newsrooms and coverage throughout Asia. Read more about the launch here.

By Avani Adhikari and Rebecca Isjwara

Diversity and Inclusion is a relatively new concept in Asia and despite the work of organizations such as the BBC 50:50 Equality Project (which ANDA is partnering with), not much discussion has happened on ways to expand diversity in an Asia newsroom context. In the region, diversity often encompasses disabilities, religion, ethnicity, and language proficiency, as outlined in the ANDA project.

In Australia, ABC News has been conscious about making their content reflective of their audience, and head of network and newsgathering Gavin Fang shared that improved diversity has led to an improvement in news quality as well. Indonesia’s Tempo is creating a list and system to ensure that news sources are diversified in a few sections first, before expanding it to the whole newsroom, said Purwani Diyah Prabandari, managing editor at Tempo English.

In Hong Kong, the South China Morning Post’s digital editor Melissa Stevens said that reporter buy-in is more challenging given the size of the newsroom, but regular updates done by desk managers has helped solidify the diversity push. 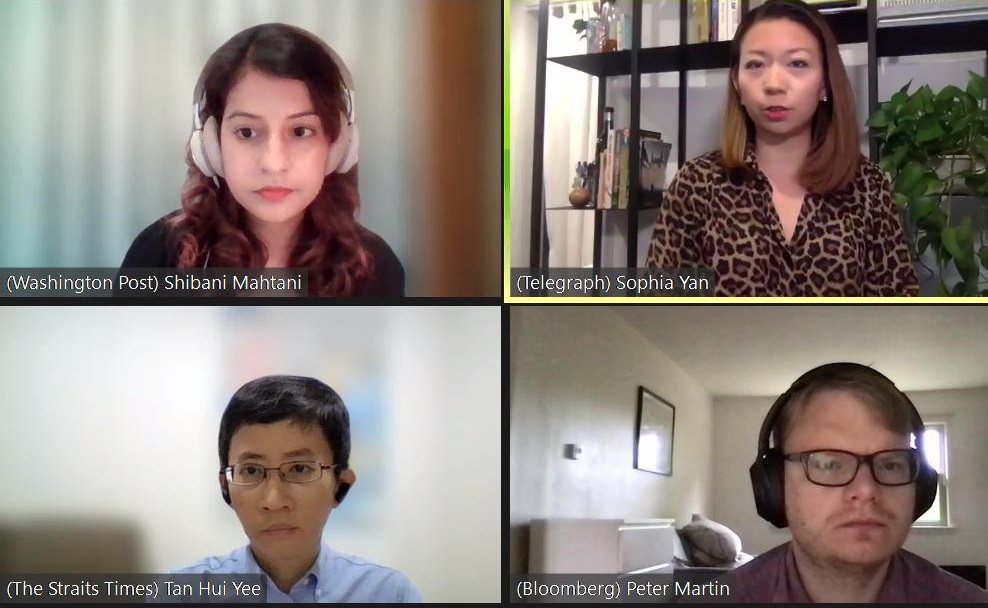 U.S.-Asia Relationship in the Biden Era

In this panel discussion, reporters covering East and Southeast Asia took to discussing some of the most pressing questions related to the U.S.-Asia relationships. Touching on topics such as Biden’s current policy towards China, the need for U.S.-China partnership in Myanmar, as well as vaccine diplomacy, panelists brought out their unique expertise of the region.

Panelists Peter Martin, Defense Policy and Intelligence Reporter at Bloomberg News (Washington), Tan Hui Yee, Indochina Bureau Chief at The Straits Times, and Sophia Yan China Correspondent at The Telegraph agreed that the Biden administration will see similar antagonistic policies and rhetoric towards China as the Trump administration. Though China lost a lot of goodwill due its handling of the early stages of the pandemic, its current program of vaccine diplomacy as well as effective policies in curbing the virus has resulted in a lot of nuanced opinion on the ground. The U.S., with its isolationist policies towards vaccines and medical supply on the other hand, has lost political field to China in that regard.

The panel, moderated by Shibani Mahtani, Southeast Asia and Hong Kong Bureau Chief at the Washington Post, ended with a discussion of the role journalists play in the ongoing culture war between the U.S. and China, and how they can be more proactive towards avoiding biases. The common consensus was that they have consistently looked for sources beyond the Western funded think-tanks and pro-government organizations in order to be fair in their representations. 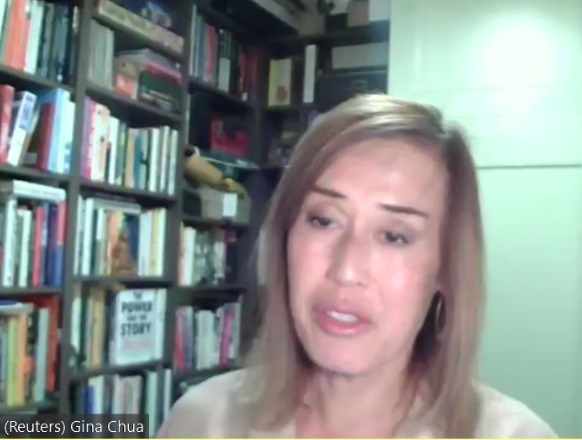 Gina Chua, the newly appointed executive editor at Reuters, is the first Asian and openly transgender senior executive at the organization. In this chat, Gina discussed her gender transition as well as her role as a newsroom leader responsible for thousands of reporters and editors.

“While the pandemic has been terrible in so many ways … for me it turns out to be not so bad,” she said. “It meant that I have time to settle into this skin … it really helps me ease into it.”

In her new role, Gina regularly revisits the notion of news as a product. In particular, she is focused on the new forms of storytelling. The newsroom is also taking further steps in ensuring representation in their content by ensuring that minority groups are regularly included in everyday stories instead of only coverage that are about the specific minority groups.