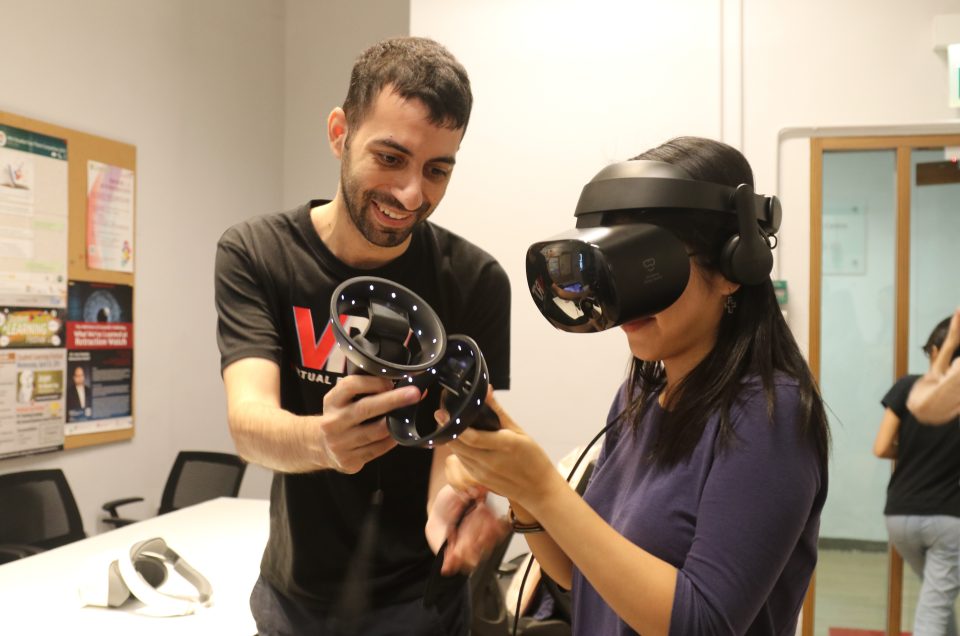 There were bullets flying, tanks rolling past, a helicopter whirring above and an injured child in your arms in the virtual reality simulation at this year’s AAJA – Asia’s N3Conference.

Run by the International Committee of the Red Cross (ICRC), participants learned to generate and further understand “empathy” at the Empathy and Ethics in Crisis Reporting Workshop.

Working with Communications Strategist Pawel Krzysiek and Communications Officer Patrick Griffiths we determined three key things you can do to incorporate empathy into your reporting:

1. Understand The Difference Between Empathy and Sympathy:

Sympathy and empathy are often thought to be similar, but there is actually considerable differences. Sympathy is feeling sorrow when we see suffering, which is often a short-term emotional response. Whereas, empathy is actually feeling the emotions – whether joy, sadness, anger or despair – of another person.

“Empathy is when the emotions of others resonate with us,” said Griffiths. “It can help us to understand and care for other people.”

These empathetic feelings can often motivate and inspire the public to act, highlighting the importance of journalists to use empathy rather than sympathy to spark this invaluable human connection.

“Empathy in reporting means the attempt to understand other people’s feelings and experiences. It thus widens the angle of the story, looks deeper, gets more insights,” said Krzysiek. “In that sense, we feel that such news covering can give people justice.”

2. Harness The Power of Emotional Contagion:

Referencing a case of a young Afghan boy, Griffiths explained emotional contagion – an emotion that goes viral on a widespread scale.

Ahmad Rahman, a young Afghan boy who lost his right leg, was filmed grinning ear-to-ear and dancing joyfully on his new prosthetic leg at an orthopedic centre run by the ICRC in Kabul, Afghanistan.

The story rapidly rose to fame. Currently at 1.4 million views on Twitter alone, the video was quickly picked up by a range of global news outlets.

“If you smiled when you witnessed Ahmad’s joy in that viral video, then that was empathy in action,” said Griffiths.

3. Let The Characters Tell Their Story:

“Be kind. Be close. Try to understand. Try to feel. Always dig deeper,” said Krzysiek. “These basic steps can help shape your story towards a real human-first angle.”

Many empathetic stories just like Rahman’s serve to open the door for bigger conversations. At first we may see a dancing boy, but now the public’s attention was brought to the underlying issues. 30 years of conflict in Afghanistan, more than 100,000 people had received artificial limbs at the same ICRC Kabul centre.

Empathy and emotional contagion provide the ability for reporters to shine a spotlight on issues that could have otherwise slipped under the radar. And in some cases, this can produce exceptional results for those affected.

In Rahman’s case, journalists reported that his mother has eight other children and has to travel many hours to take him to the orthopedic centre. This viral video had resulted in offers to donate to his family and others in similar situations, Griffiths added.

Taking this empathetic approach to storytelling allows for a wider view of the story with a personal viewpoint that allows for the story to be told in its entirety, while also giving the reader the opportunity to relate to others and understand their situation.

“Can empathy help us connect with and care for people who experience hardship oceans away from our own lives? I think so,” Griffiths said. “Does it have limitations? Yes. But it is also something we can get better at, we can work at widening our circle of concern.”

Samantha Topp is a Hong Kong based journalist working for Generation T at Tatler Asia. Former intern at Hong Kong Explorers Initiative and HK Tatler Magazine as a reporter and photographer. Samantha has written for a variety of digital and print publications, primarily focused on current affairs, environmental and social news. Connect with Samantha on Twitter, Instagram, and LinkedIn.